The Return to Emacs

I am a Vim user for about 3 years now, but I initially used Emacs before I used Vim. Vim is not my first choice when I was still at the stage of choosing which religion to take. How do I get into Vim then? I learned vim during my internship because we are not allowed to have local copies of the source code. Thus, we had to ssh into a remote machine and code using whatever editor is available on the remote host. Emacs is not installed in that server, and I’m not allowed to install stuff. Nano would be inadequate for editing source code, so I chose vim instead. 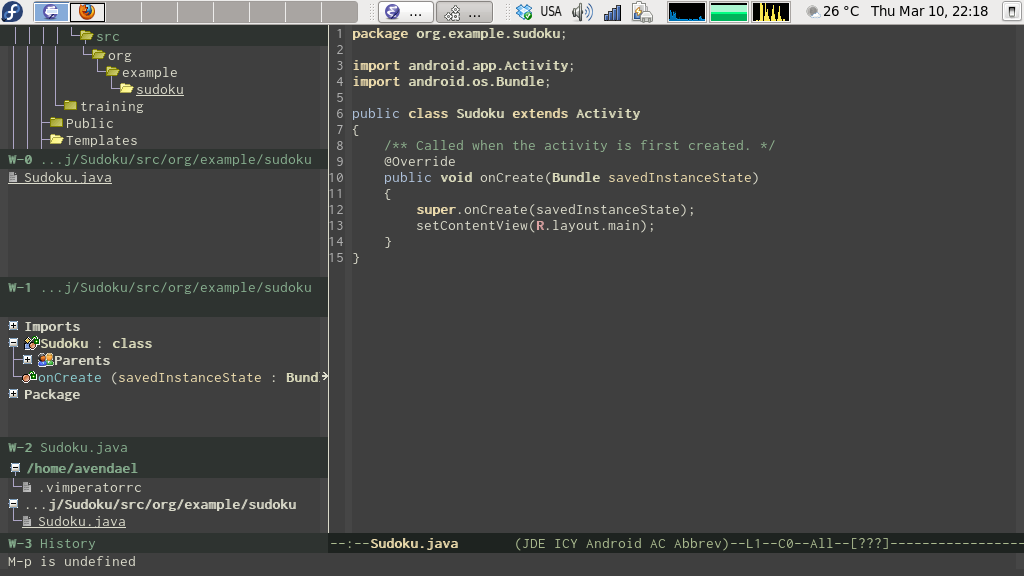 It was hell at first. It’s like being forced to wear clothes you don’t like to wear. The more I learn about it though, the more I appreciate it. I really like how you can chain commands in Vim whether it be a movement or a search command. Heck, even search commands are considered movement commands in Vim! Replace until foo? ct/foo<RET>.

Three years using Vim taught me a lot about it. I started using different plugins after the first year. NERDTree and TagList are almost mandatory. Since I usually code in Java, it’s hard to get by without an IDE like Eclipse. Thankfully, there’s eclim to help me stay inside vim. Vim can be configured via vimrc. Mine has a lot of BufEnter/BufLeave autocmds there to suit my needs. Not to mention some custom keymappings here and there.

Then comes the time to rid my home directory of unwanted files. I found my old copy of emacs configs hanging around somewhere in my home directory. It was the day I remembered that I was an emacs user first. Vim almost made me forget that fact. Guess what, I did not delete those files. Instead, I booted up emacs. Down the rabbit hole I go.